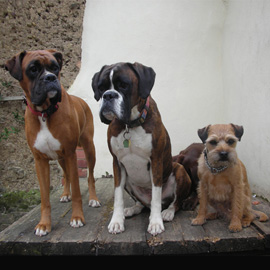 Marcus and Tracey contacted me regarding their 4 ½ year old Border terrier’s behaviour. They had adopted him from a rescue centre originally and had been attending training classes but hadn’t noticed much improvement and were despairing of which path to take next. Scrumpy’s problem was that he went berserk when he saw another dog…. Barking, lunging and scrabbling with his feet to get near them or at them, once he got near them he usually gave them a nip! Marcus and Tracey could really see no other solution then to keep him on a lead and muzzle him for the safety of passing dogs which they weren’t happy doing. It was at this point that they gave me a ring and we arranged an appointment for them all to come and see me.

Scrumpy displayed his anti-social behaviour almost immediately which I then showed Marcus and Tracey how to address and we also modified his walking on a lead in a controlled manner.

As Scrumpy was 4 and a half years old this behaviour had been going on a long time, and never really addressed, possibly he could have been put in a rescue centre because of this behaviour so this case was never going to be a “quick fix” but through lots of patience and hard work on Marcus and Tracey’s behalf they are now reaping their well-earned rewards. Scrumpy recently came to stay with me and I was amazed at how much progress they had made! This is what they had to say:

Scrumpy is so much better and where we used to dread walking him we are now quite happy and relaxed to. He no longer wears a muzzle and the barking, lunging and scrabbling behaviour is a thing of the past. We are very pleased we found you.