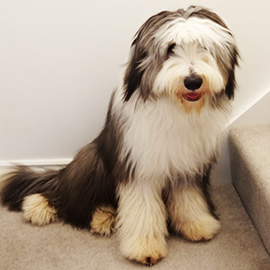 also have a look at Meg

I know I’ve said it before……. But what’s a problem for one, isn’t for all!! And many people might read this and think ….’ That’s not much of a problem’, I could live with this. But this was a problem for George and his wife. They had a very lively 10 month old Bearded Collie who just wanted to jump at at everyone he met, creating a lot of stress where George and his wife lived, as it was a retirement village and there were a lot of elderly people out and about.

Rory also had a poor recall, meaning that George was reluctant to let him off the lead that often because it could be quite difficult getting him to return, coupled with not knowing who Rory was going to plant his feet on while he was free range!

George and I met up at very popular dog walking area and within seconds it became apparent that Rory was about to jump all over me. So, we addressed this behaviour first, setting up a nice, simple plan. We then moved onto Rory’s poor recall.

Rory was a little slow on the ‘ uptake’ to start with, but then soon realised what was expected of him and positively enjoyed the new routine, returning back to us every time . Good boy Rory.

It was nice to receive a little update from George recently…

I agree we didn’t have major problems, but pulling hard and jumping up at people were hard to deal with and particularly difficult where we live with elderly neighbours. So helping us resolve these issues were important to us. We are also more confident about letting him loose with other dogs and recalling him with the method you taught us.

Several residents and staff have commented on the improvement they can see, so it’s not just wishful thinking on our part!!! There has been an improvement. Thank you for your help.