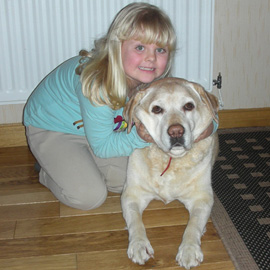 also have a look at: Henry

Darren phoned me regarding Harvey his 8 year old yellow Labrador who had recently taken up a new habit of eating poo (Coprophagia) and Harvey wasn’t too fussed about who’s it was! But understandably Darren being the father of three small children was fussed about this so we arranged a meeting where I went out for a walk with his wife Mel and Harvey.

We hadn’t really got as far as the dog exercising fields before Harvey sniffed out some cat poo (we think) and hoovered it up in true Labrador style. When we entered the exercising field Harvey really only had one thing on his mind, and that was to clear up where other dog owners hadn’t!

This is a very common problem with the food loving breeds of dogs and owners often just put up with it because they feel it cannot be cured. But I put a few new rules in place for Harvey alongside a strict plan of action in which we practised there and then.

I then left Darren and Mel with a small amount of homework and this is what they had to say 3 days later:

Can’t believe it… Goes out on walks now and doesn’t even look at it! Walks are so much more pleasurable for everyone. Thank you.