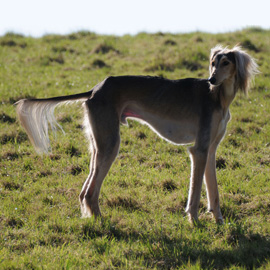 Jo and Gary contacted me regarding their 2 year old Saluki (Neo) who was chasing after joggers, barking and prancing around them, and if that wasn’t bad enough he was also baring his teeth! Jo and Gary were getting very concerned because it was only a matter of time before he bit someone. Jo explained to me that it was getting increasingly difficult to walk Neo because being a sight hound he could spot a jogger on the horizon in a split second and then he was off before she could even get his lead out of her pocket.

I had a gut feeling how this situation was going to pan out being a sight hound owner myself, so first of all we practised some exercises on our chickens and horses just to make sure Neo knew what “leave it” meant. Then we moved onto the real problem of joggers and with the help of my son, we set up a situation complete with son in jogging gear and reenacted the whole jogger, open space, moving at a speed scenario. And of course Neo went from being quietly trotting alongside us to ears pricked full alert chasing mode and we then applied what we had taught Neo earlier on with the livestock.

Neo was a quick learner and took the new instruction and rules on board very quickly.

I must say, that after a session with you he is a changed dog. The ‘Leave it’ command works a treat and on our walk today, he behaved immaculately, coping with other dogs and joggers with no issues whatsoever. What a difference. I am amazed that you could have such a dramatic and immediate effect. This change has already improved our enjoyment of dog ownership and we are determined to keep this up and also adopt the same behaviours with our Afghan.
Once again, thanks for your time and your invaluable advice.