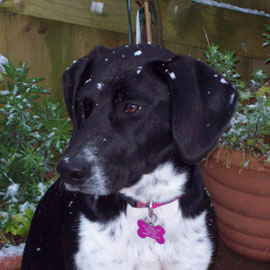 Carolyn emailed me regarding her 5year old Pointer x Collie named Roxi who had always been pretty much the perfect family dog, but for some unknown reasons she had now started up some rather worrying behaviour .

Carolyn was a working mum and Roxi had always been used to being left for a certain amount of time on her own in the home, but something had now changed because Carolyn was now coming home to the neighbours reporting that they had heard her whining and barking and when l went along to Carolyn’s home it became apparent that this wasn’t the only problem. Along with the barking and whining Roxi had chewed the door frames, skirting boards and had even seemed to be digging her way out through the plaster walls!!

As if this wasn’t enough to contend with, Roxi was now showing aggression towards other dogs in the local park….which was totally out of character as she was usually a well trained and well behaved loving dog.

After a fairly lengthy discussion with Carolyn and her son on Roxi and her daily routine, likes and dislikes, past and present, we devised a new plan for Roxi which Carolyn was to put into action immediately.
We then went out for a walk with Roxi to the local park where Roxi almost within minutes showed us her aggression towards another dog, this was addressed with a calm assertive method which we then continued to practice for the rest of our walk with great success.

Roxi is great again when we leave her at home.
I have been ‘working’ her on walks and reinforcing all her training….she loves it and is much less aggressive to other dogs again now too.
Many many thanks for all your help.