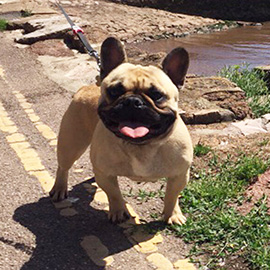 also have a look at: Frankie

There’s only one sentence to sum this little rascal up….’ Reggie came good!!’

And here’s his story …..
Reggie is a 18 month old French Bull dog. His owners Andy and Debbie brought him home to live with them at the age of 8 weeks. And all was good for a few months.

Until Reggie went into another life stage, around 7/8 months, and then the trouble started. Walking Reggie off the lead didn’t really cause any real problems, pop him back on the lead and Reggie just went into the full lunging, snarling, screaming ,attack mode and he wasn’t messing around!!

It was time for training classes!! This is the beauty of a good training class. It’s the perfect place to practice on lead training in a controlled environment .
Ok, I’m not going to say things were easy. There were weeks when Reggie was very challenging and Debbie actually said to me ‘ I don’t think we are ever going to stop this on lead aggressive behaviour’. If I’m honest ….for a second I was thinking something on the same lines.
But, my reply was…..There is no other way and we have to keep going ‘.
And we did, and did Reggie come good? He certainly did!! He’s now the amazing little Frenchie. Plays with other dogs and is friendly and sociable . A joy to own.

“Tricia, you trained me to train my dog. I tell all my friends about you,and I don’t know where we would be now if we hadn’t met you. You taught us some magic words (commands) and applying these words to interrupt certain behaviour has changed Reggie and most importantly changed our lives. Thank you so much.”

(And I would like to thank Debbie for not giving up and persevering with the training. It wasn’t an easy task and a lot of owners would have ‘ thrown the towel in’. So well done….you all deserve it).