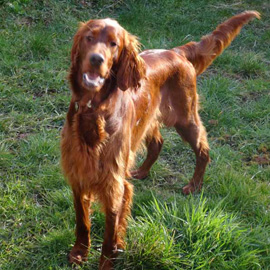 The proof was in the eating…..or maybe training!!

We rescued our Irish Setter puppy, Flynn, when he was just ten weeks old. Flynn lost his mother when he was just two and a half weeks old and sadly the breeder could not find homes for the puppies (he was one of a litter of ten) and she could no longer afford to keep them.

Having owned a rescue setter before we weren’t at all daunted by the prospect and were not at all concerned about his training.

However, it became apparent quite quickly that although the same breed as our other dog, Flynn had bucket loads of confidence and a mind of his own. He was also entire and very interested in female dogs in our local park.

Therefore, we felt that even though we felt we could handle him the best thing to do would be to enrol in training classes. However, at the end of two ten week sessions of classes costing us over £150 we felt that we were no further forward and were being given all sorts of conflicting information.

Flynn’s behaviour had worsened, he was not interested in treats and pulled like a banshee on his lead. His recall was very hit and miss, sadly more miss than hit and things had reached an all time low at home. We honestly felt that we could no longer live with him but couldn’t live without him either.

Now it may also be worth mentioning that unlike most Rescue centres, the Irish Setter Rescue will not allow you to neuter an entire dog unless your vet recommends it. This is largely due to the fact that once they are neutered their coats will not grow as they are meant to. Our vet has confirmed this and we have been advised that due to the nature of the beast it will not calm an Irish Setter down. So we felt that this was not an option and we would have to try and find an alternative solution.

I was therefore googling boot camps for dogs in the hope that someone out there would be able to help. Although I came across Tricia’s website I did not contact her at that point. However, a few days later I was speaking to my hairdresser and she suggested that I contact her friend who was a dog behaviourist. It turned out to be Tricia.

I mailed Tricia that night and cannot tell you how relieved I was already when she wrote back to me and advised that setters were her speciality. I called Tricia that evening and agreed to take Flynn over to her in Longdown that coming Saturday afternoon. Tricia was able to explain to us that Flynn would not necessarily be interested in treats as he is an entire setter and that to get him to do a recall we would need to use something that would be of higher value to him. Tricia produced an alternative and it worked!!

Tricia also showed us how to use a more suitable collar on Flynn. The trainers that we had been to previously had put me off using one as they had said that we would need to condition Flynn to use it. This made me think that if he needed conditioning then it must be cruel. I now know this to be completely untrue and for the first time in 12 months I can walk Flynn by myself. I have spinal problems so for me this was nothing short of a miracle.

We then went for a walk in the fields with Tricia and two other setters that were boarding with her at that time. The original re call tactic no longer worked for a recall, as Flynn was more interested in the bitch dog that had come for a walk with us. So Tricia came up with another strategy, and it worked!!

Again it was like a miracle had happened. And harmony was restored on the walk and each time we recalled him Flynn returned to us.

Tricia also advised us how to handle Flynn’s bad behaviour at home he was always around us when we were eating and barking at us.

We left Tricia that day feeling more positive and happy than we had been for weeks. We have continued to meet up with Tricia on Saturday afternoons for a talk and walk and I am pleased to say that the difference in Flynn is absolutely amazing. He no longer gets put on his lead during these walks and he recalls perfectly.

He still chases after a couple of bitch dogs when we are out with him, but we now have tactics to control him. We cannot thank Tricia enough, we feel that someone was prepared to listen and not only listen to us but had the knowledge of the breed to be able to help us.

Flynn loves going to see Tricia, and how nice that we can now take him for a walk on the beach for a couple of hours in the sunshine without being worried or concerned that we would run off.

Flynn has also learnt that when we are eating he can stay in the room with us but only if he leaves us alone, so mealtimes are now peaceful again. We are still having a few problems with the barking for attention, but this is improving and we are confident that we will get there.

I have spoken to the Rescue centre and told them all about the problems we were having and Tricia and they have also asked me to pass on their thanks to her. In our eyes Tricia is a miracle worker and she has turned our home back into a happy home with a lively bouncy dog. Thank you Tricia.