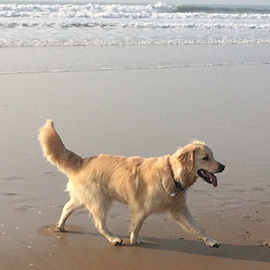 also have a look at: Kristal and Sascha

It’s very easy to get set in a certain ‘ mind zone’ when something unpleasant happens to your dog. Charlie had been badly attacked by a very large dog when he was a puppy. And it would have been all to easy to to link this behaviour he was displaying towards other dogs now ,to the incident that happened 4 years ago.

But on meeting Karen and her lovely 4 year old Golden Retriever Charlie I soon became aware that this behaviour of barking at other dogs when on the lead was not fuelled by nerves….quite the opposite in fact!!
Coupled with a poor recall and territorial barking in the house ,Karen and I spent a couple of hours working through the various behavioural traits she was struggling with.

Charlie was very happy to take on the new regime and I recently had this update from Karen.

Hi Tricia You asked me to let you know how Charlie was getting on after a couple of weeks. It’s bern really difficult not to email you earlier because the changes in his behaviour have been so remarkable!! I bought the training equipment you recommended and started the plan immediately . Charlie is now happily walking straight past dogs he would have made a fuss about before ( including a Staffie and Greyhound he doesn’t like !)

When the postman cones or someone rings the doorbell, he has a small grumble, but the full on ‘ burglar bark’ and racing around the house has stopped . We are still working on the dogs / animals on TV problem, but it’s a lot better than it was. I can let him off the lead in a field and know that he will come straight back whenever l use the tactic you showed me. Over all he’s a real pleasure to have around and we are both enjoying our walks so much more now. My daughter came back from uni last weekend and couldn’t believe how much better he was. I put off addressing Charlie’s behaviour because I thought it would be really difficult and take a long time. Had I known how easy it would be, I would have tackled it earlier. Thank you so much for your help.
Karen