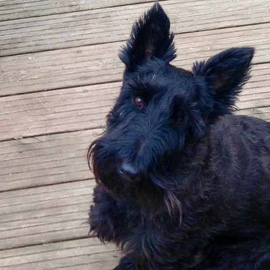 Amanda emailed me regarding the behaviour of her Scottish Terrier ….Louie.
Louie was a 4 year old neutered male who was a family pet, lovely towards humans, but when he met another dog out on a walk he became aggressive, lunging , nipping and trying to dominate them. Amanda had got to the stage where she felt she could not let him off the lead anymore. And this was a shame because she also owned 2 other dogs that were fairly problem free and they both ran free off the lead.

We met up ,and Louie’s behaviour soon became very apparent. We started some new training on him, which he seemed to take on board very quickly and we practiced the new plan, making sure Amanda and her family really understood exactly what was involved here.

It was actually really nice to hear from another dog walker who walked in the same area as Amanda ….that the lady with the Scottish Terrier now has him off the lead and he’s absolutely fine now with other dogs!!

But Amanda sent me this update recently on how things were going as well….:

I am emailing you to give you an update on Louie’s behaviour since we last saw you two weeks ago because he has been a totally different dog. We’ve taught him, Buster and Nellie the ‘leave it’ command and when we go on walks we have applied it to dogs he wants to dominate. We bought the pet corrector spray and have used it on him three to four times but over the past week we haven’t needed to use it at all. A week after we saw you, we were able to let Louie off the lead and he no longer tries to assert himself over dogs but he still approaches them in a very dominating way with his tail straight up. But once we say ‘leave it’ he comes straight back to us and leaves other dogs alone. It has been lovely to see Louie off the lead all of the time with the other dogs and being so well behaved. Thank you so much for your help with Louie.