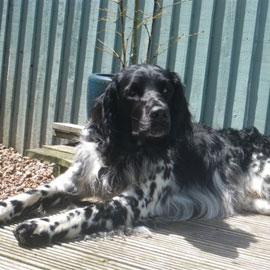 Rachel and l originally met through a recommendation from a veterinary nurse, Rachel and her husband were wanting to go away on holiday but were struggling to find someone to look after Rudi because apparently he had been a little high maintenance for a couple of previous sitters!
Rachel’s main priority at that moment was to get a nice safe place for Rudi to stay while she went away but she did mention her concerns that she was having with Rudi and his training/behaviour.

It seemed that Rachel’s husband had no real problems with Rudi, he would do all the basic obedient commands for him and he could walk him off the lead and get a good recall from Rudi.

Rachel on the other hand had walked him off the lead up until the age of 7 months, until one day Rudi had decided to ignore Rachel’s command to come to her and practically ended up on a dual carriage way!!
Coupled with a few more incidents of Rudi challenging Rachel she asked if while he was staying with us l might start on some basic training with him, which l did .

On Rachel’s return from holiday we ran through what I had started embedding with Rudi’s training and Rachel then started attending my weekly training classes.

Rudi has made amazing progress through his weekly training , I have watched him change week by week through Rachel’s hard work and sheer determination, Rudi obviously looked upon Rachel’s husband as his pack leader, but he did not have the same relationship with Rachel. It has been fascinating to watch this relationship change over the months as Rudi takes on board instruction from Rachel. I receive the occasional text from Rachel telling me what a successful walk she has just had with Rudi off the lead again running free, which 6 months ago was a totally different story.

This is what Rachel has to say now…..

“I really needed some help with Rudi as I had lost confidence since he had failed to come back to me and I was concerned that something would happen to him. I attended a series of dog classes and then took Rudi to private sessions with a Dog Trainer. None of this training helped me with him. We were also struggling to find someone to look after Rudi with on the few occasions we had to leave him. We had had no success with the “pet sitters” who all felt Rudi was too lively for them. The first time I left Rudi with Tricia for a trial night I knew that he was in safe and capable hands.

I started weekly classes at which Rudi would bark for attention and wouldn’t come back to me for months. But Tricia took time to understand what my training needs were with Rudi and we began to make headway. Rudi started to listen to me. In the car, at home and when we were out I persisted with the same basic commands over and over again. Eventually after 5 months I took Rudi out off the lead on my own – it was just the greatest feeling to have him come back to me. I still let Tricia know every time Rudi and I do something new together as I know she is so interested and excited for us. I know we still have lots of things to learn so thank goodness we have found Tricia who we have the utmost trust and confidence in. “