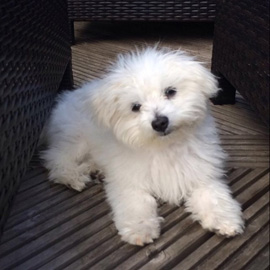 Zoe’s mother initially contacted me while her daughter was on holiday to explain the situation with their family dog Oakley….a Maltese Terrier. Oakley was 1 year old and the first family dog her daughter had owned. They had specifically chosen this breed due to the fact that they had read that they were generally a easy breed to train/ live with.

The telephone conversation unfolds with Zoes mum that the situation they were in with Oakley was a far cry from what they had read. Oakley barked during the night, getting them up at least 4 times to get let out in the garden, where after 5 minutes of running around…then refuses to come back in .
They also felt they couldn’t let him off the lead because he had run away from them on a couple of occasions near their home. Oakley barked at people and also nipped the children. All in all they were not enjoying this little dog and were seriously thinking of rehoming him!!

I took a drive down to Exmouth and met up with Zoe when she returned from her holiday to observe some of this behaviour. I felt their mood was generally low with this little dog because they really were tired and at their wits end with him.
We worked through each situation / trait step by step, trying various plans until we all settled on one that suited everyone.

This plan was not going to be a quick fix regarding his behaviour of getting his owners to come down to him 4 times a night because the behaviour had been going on quite a long time ,and had become quite embedded.
So we agreed that Zoe should give me daily update/ progress reports to start with,just in case anything needed altering along the way.

Here are Zoe’s updates, and I’m delighted to report that Oakley is now the family dog they always hoped he would be.
23.4.15…Only woke 2 times last night, so improving.
27.4.15…2 nights sleep!!! And fun walks off the lead.
2.5.15….So much improvement in every way. Family and friends have all noticed the change to !!