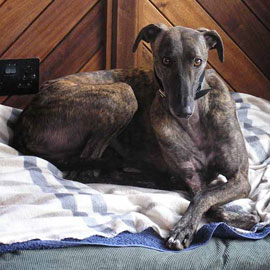 This is probably one of the most satisfying/ rewarding/heart wrenching cases l have had the pleasure of being involved with, and this was very much an extreme case of a very mistreated little dog. You may or may not have noticed that l do not have any other case studies on Greyhounds on my website…..reasons being?…They really are the most gentle/amiable/easy going breed of dog, and the sad thing is………there are so many out their in need of rehoming!! Greyhounds in Need are a fantastic charity, so if you are thinking of maybe getting a new dog, do not over look this beautiful breed.

We adopted Myra from Greyhounds in Need, an excellent charity concerned with the plight of greyhounds, particularly the Spanish bred hunting greyhounds – Galgo’s. We had gone to the GiN kennels intending to adopt one or two of their other Galgo’s – but fell in love with Myra as soon as we saw her. The GiN staff explained that Myra was extremely nervous and would need a lot of rehabilitation. We have a lot of experience with sight-hounds and have had several very nervous greyhounds, so we thought we’d be able to manage and hoped to turn Myra’s life around.

How wrong we were! Myra was so very nervous that she would throw herself bodily at our windows day and night. The slightest sound or movement would spook her and she would jump at the windows, presumably trying to escape – resulting in poor Myra being covered in bruises and everything in her way ending up on the floor. I quickly learned not to leave anything on the windowsills or kitchen worktops as it would accidentally get smashed as Myra leaped for the windows. She would also ‘pee and poo’ sometimes due to her extreme panic. We were unable to have visitors as she couldn’t cope with strangers and would bark loudly, non-stop, running in a blind panic around the house, leaping at the windows. But, she would also get very distressed if left alone, even for just five minutes – this would also result in her throwing herself at the windows plus constant barking and yelping. We had to keep all the windows and doors closed all the time which was almost unbearable on sunny days. If I went outside, Myra would panic (even though she could still see me) and it became really difficult to care for our goats and chickens – or even simply hang the washing out! As things worsened, my husband slept downstairs at night in an armchair to keep her company. During the day, I couldn’t leave her for long enough to even take a quick shower! She would eventually be overcome by exhaustion but if I tried to tiptoe out of the room she would wearily jump up and start again. Anything resembling ‘normal life’ was out of the question.

Walks were also a major problem. We managed to take Myra for a very short walk twice a day, but she would go into a total tailspin if she saw a dog or a person even in the distance. She would attempt to wriggle and claw her way out of her collar etc, throwing herself wildly around in fear -even trying to climb trees (yes, really!) in her efforts to escape. We struggled to hang on to her as she would repeatedly jump six feet in the air, spinning and bucking in fright, worrying that she would accidentally injure herself (or us!) We were walking her using a collar and lead, plus a leash and a harness as she was constantly fearful and just desperate to blindly run away. Companionable walks with our friends and their hounds became a thing of the past.

Myra was also really terrified of kissing gates. We live in a very rural area with lots of lovely walks from our garden gate, so it was frustrating that Myra blankly refused to even approach a kissing gate – and it is impossible to go more than 200m in any direction from where we live without negotiating one of these gates. We tried to gently encourage Myra, but she would just refuse, panic and frantically try to pull away and run.

Life became very restricted and we were despairing! I spoke to our vet who recommended Tricia Wills.

Immediately after Tricia’s first visit, I was able to leave Myra on her own for a few minutes and from that night my husband no longer had to sleep downstairs in an armchair. The next day I was able to leave Myra by herself for half an hour. This might not sound much, but it was a MASSIVE change! Within a week Myra could be left for a couple of hours and after another week we were able to leave her for up to four hours. She became a little calmer and began to stop throwing herself at the windows in a panic – another HUGE step forward. We were able to return to some semblance of normal life after what felt like being imprisoned!

Next, Tricia showed us how to stop Myra barking non-stop every time anyone called round. We were able to welcome visitors again and not worry all the time that someone might knock on the door, inadvertently scare Myra and launch her into barking panic attack. Once Myra’s barking at visitors stopped, the pattern was broken, she calmed down and began to be able to cope with callers.

On a subsequent visit from Tricia, we were shown how to walk Myra so she remained under much better control, keeping her safer and calmer which, in turn, gave us confidence and made walking her so much easier for us. We dispensed with the harness and leash as she began to walk well on a lead. Being calmer and more ‘contained’ led to her being less worried by seeing people and dogs and able to walk past them with much less fuss.

We were still only able to go for very short walks though because of Myra’s absolute terror of kissing gates. However, one day Tricia decided that Myra was ready and it was time to tackle this. We approached the first kissing gate and – within seconds! – Tricia got Myra to go through the gate! Myra wasn’t entirely happy with this but she did it! We then continued with the walk and Myra went through another ten kissing gates! Each time we passed through a kissing gate, Myra found it easier until, at the end, she was perfectly happy and relaxed with them. So we can now all enjoy lovely long walks from our garden gate, Myra is getting plenty of exercise which helps her to stay calmer, she is gradually getting used to seeing people and dogs, she is gaining confidence and is much happier and more relaxed – and therefore, so are we!

Tricia’s methods are kind, gentle and very subtle – but they WORK. She has quickly transformed Myra into a much happier, calmer more confident dog who is a real pleasure. Myra still has a few ‘issues’ but I am confident now that these can be overcome.