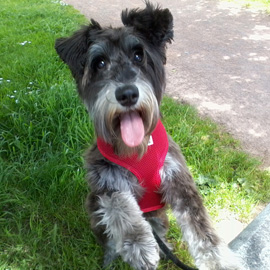 also have a look at: Nelly

Rufus is a 15 month old Miniature Schnauzer and his owners Billie and Peter contacted me because they were becoming increasingly concerned about his behaviour. It would seem that on the lead Rufus lunged and barked at passing dogs , and if you let him off the lead …..he would irritate the other dog with his persistent barking in their face , the owner would then get a little fed up and scoop their dog up and retreat . Leaving Billie and Peter feeling pretty frustrated as you can imagine. Rufus had previously been quite talented at agility, but because of his current behaviour Billie felt she couldn’t possibly take him along anymore.

Billie and I met up and to be honest Rufus was very keen to please , though we did have a brief demonstration from Rufus on how his meet and greet could be!!

I think Billie had taken a lot of advice from various people who were not possibly qualified in ‘behaviour work’ and had lost her way in what to do.
So I think she appreciated going back to basics and having the hierarchy/ pecking order/ life stages explained to her.

Hi Tricia……We took Rufus to the beach yesterday ,with some trepidation as he usually goes mad there. Before we started your training if he saw another dog, even a very long way away, he would bolt after it. But we walked along the top of the beach , Rufus playing with his ball and ignoring the dogs down at the waters edge playing. He did run up to 2 other dogs, the first dog owner did not want their dog to play , so I called Rufus, and he came to me. The second dog he had a little play and then we moved on. Rufus was not at all aggressive,just a calm but playful puppy….and NO BARKING!!
We walked around Exmouth and he was good passing all the other dogs he saw.
I am not saying he is 100% yet, but from the progress so far it is worth it.
We will certainly recommend you to anyone who mentions they have problems with their dog Thanks again..