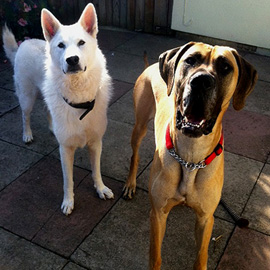 Hannah contacted me initially just to chat about her new Great Dane, Cooper.

Cooper had not had the best start life when he was re homed to Hannah last year. He had not received much off the lead walking and hence had little socialisation with other dogs except for the immediate pack he lived with and accepted. Hannah owned 2 other large breed dogs who received regular off lead daily walks and interacted with other dogs on walks, causing no problems. And although Cooper integrated into his new pack and surroundings extremely well, walks were becoming a bit of a problem.

Firstly, Cooper ran off when let off the lead and secondly if he was kept on the lead he barked, lunged and jumped about when another dog was in sight. Hannah was beginning to think that this was the norm for a dog of 2 years that had very limited exposure of every day life! Hannah and I met up a couple of time and really this was a case of knowing which buttons to push with Cooper because in a very short space of time we had Cooper off the lead, coming back to us when we called him and socialising and mixing with others dogs without any issues.

This is Hannah’s recent update…

I am now enjoying Cooper off the lead, he is perfect with other dogs; friendly and sociable. I am more relaxed with him and enjoying the walks. I feel I have a better bond with him because I have more overall control.

I found Tricia helpful with lots of good advice to help me understand my dogs behaviour. I would not hesitate to recommend her to anyone experiencing a problem with their dog.