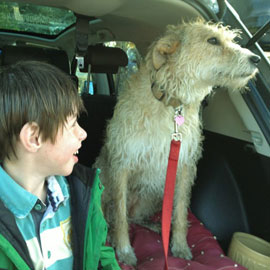 also have a look at: Maddie

Janet contacted me regarding her 2 year old Lurcher Sammy.
Sammy’s poor recall was starting to get him into a lot of trouble !!

He had started to develop a strong hunting instinct and would often go missing for quite sometime.
Janet and I met up and went for a walk with Sammy. The first field we encountered was
of fairly low value to Sammy, hence we called him back on several occasions and he was very responsive.
So we decided to take things further and let him off the lead in our near by wood.

It was almost as we had flicked a switch!! Sammy became very alert and went off hunting deer and foxes. We worked with Sammy , trying a variety of techniques , but settled on one that suited Janet and her husband…..as well as Sammy.

I recently had an update from Janet and was delighted to hear what progress they were making!!

It has been 4 weeks since Sammy and I saw Tricia and walks have been transformed!!
Sammy had a history of chasing deer ,or just going off tracking for 20 minutes or longer.
He ignored me completely when he got in a ‘ hunting trance’ but always turned up to precisely the same place he left .
I had started putting him on a lead for woodland walks.
Following our session with Tricia we are able to go everywhere , including woodlands, off lead with no problems.
Sammy now stays reasonably close and comes when he is called.
He has learnt what is required very quickly and we can enjoy our walks again.
Best Wishes
Janet.