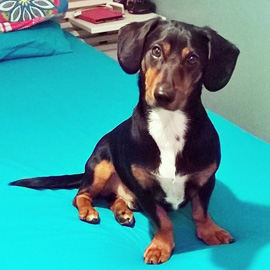 Phillipa’s family had always owned Dachshunds, so felt they new the breed fairly well, also Phillipa s mother owned Reggie’s sister and she wasn’t really showing any particular behaviour traits. So Reggie’s behaviour of barking and nipping other dogs seemed totally out of character to Phillipa and she had hoped that he might grow out of it, but it had seemed the opposite had happened ,and the behaviour was in fact getting worse!!

Phillipa ,Reggie and myself met up and Reggie was right on form the minute I approached him with another dog…..swinging around on the lead, barking and scrabbling to get at the dog. Reggie was displaying classic dominant behaviour and we started addressing this behaviour straight away with a technique that seemed to suit Reggie very well. We then introduced Reggie to a few more dogs, sticking with the same technique and plan and it was interesting to see Reggie became quieter and calmer with each interaction.

Phillipa then continued on with the plan I had set up for them both and emailed with this update a couple of months later…..

Well I can honestly say Reggie’s behaviour has been amazing!! He’s stopped barking at the visitors at home and at other dogs when walking. He’s generally more relaxed when meeting other dogs too, although he does like to try and have a bark sometimes, but we’re ready with the tactic you taught us and he responds very quickly! Thank you so much for your help and would not hesitate to come and see you again if ever we had any doggy problems in the future”.
Kind regards Phillipa