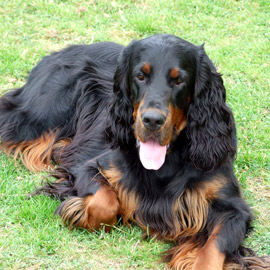 Angela contacted me regarding her 3 year old Gordon setter – Fleur, rather an intriguing problem actually because Angela did a lot of general obedience training and agility with Fleur, so this wasn’t going to be a case of… The dog was just getting the upper hand!

The scenario was that Fleur was a bit unpredictable with the unexpected (example) – somebody stepping out in front of her unexpectedly or turning a corner to be greeted by a strange dog or person. Fleur would react by firstly tensing up and secondly seeing the person or dog off with a lunge and a bark and the intriguing part of this problem was, was that although the trait had always been there, it had actually got worse since they moved to a different house/area 12 months ago.

Angela and Fleur came over to my house so we could have a good look at this problem. We created a few situation to witness Fleur’s unwanted behaviour and then devised a plan of action in which we practised a few times to make sure everyone had a good and clear understanding of what we were setting out to achieve. Because Angela had done a lot of obedience training she knew how important “timings” were when instructing a dog.

Angela emailed me a few weeks later and this is what she had to say:

I thought I should let you know how I have got on with Fleur [Gordon Setter] after coming to see you.

Well she is lovely, I can now walk towards oncoming dogs, although her hackles go up I just have to check her and she takes 1 look at me and relaxes. It is lovely walking both dogs together and on the same side, Fleur is much happier if she is in the middle. She is much more relaxed in her self and calms down a lot quicker without her screwy personality changing. It has also made her more relaxed around different situations. I went for a walk on Woodbury Common, there were people suddenly appearing from round the corner, somebody was lying down, we met somebody walking 6 dogs on a narrow path, all of these would have stressed her I just gave her the leave it command and I could see her body instantly relax. I know I will have to be on her case all the time otherwise I can see she would quite easily slip back into her old ways.

All I can say is thank you so much for in theory such simple changes but with big effect. I have already recomended you to several of my clients.