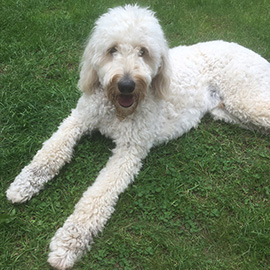 A poor recall with a dog can be one of the most frustrating traits. Whether you have a dog that totally ignores you and has its own agenda going on in its head. Or a dog that sees the whole ‘coming back’ to you on a walk, just one huge game. It seems to be a problem that a lot of dog owners just resign themselves to thinking, there can be very little done.

Dougal is a young Labradoodle, high energy and exercise is a very important in his daily routine, in order to be able to manage his exsubarance. The problem his owners had though was they couldn’t let him off the lead to drain this ‘energy battery’, because Dougal had his own ideas going on. He really didn’t want to come anywhere near you, and certainly wasn’t going to be fooled by a tasty treat.!

Douglas owners and myself practiced a few recall techniques, but finally settled on a plan that seemed to suit Dougal as well as his owners. I recently received a progress report from them and this is what they had to say…..

Thank you for all your help with Dougal. It has made the world of difference and we are now able to let him off the lead most places we go. And he really enjoys being able to run around and play with other dogs at the park and at the beach.