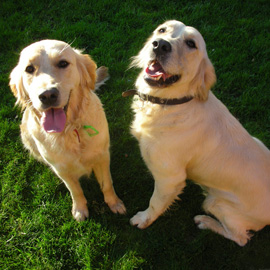 also have a look at: Charlie

Elaine’s email came through just before Christmas and I was straight back to her with a phone call because this lady sounded at her wits end.
Elaine and Philip had owned Golden Retrievers before so really they were pretty experienced with the breed but Kristal and Sascha were pushing them to their limits. The dogs were little sister which people were now telling them was a big mistake to take on, I disagree! They were 2 years old and Elaine and Philip could just not get them clean in the house and they had tried all manner of routines, They chewed up many items in the house and they were so strong on the leads that Elaine could hardly walk them anymore coupled with that they had a really poor recall. And to top it all Elaine’s husband wanted to get rid of them because he felt that they were incurable and Elaine now says she was at that point as well.

Because of this extreme situation of despair I thought it best that Kristal and Sascha came for a short holiday stay so I could have first-hand experience of what their owners were going through, find out their needs, get them into a routine and back on track because after all Elaine and Philip had been struggling along with this for 2 years, not just a few months. I kept in contact with Elaine via email with progress reports and on day 5 Elaine and Philip arrived to take them home.

Now for the nerve wrecking bit where I await their email on how they are finding their “new” dogs! This is what Elaine wrote a few days later…

Yesterday Philip and I took the girls out for a walk; we had a dog each, which we couldn’t have done before because basically they would have played up. I couldn’t help a tear because they walked beautifully within the first few minutes. Today I took them both out myself on leads through the village, the best walk I’ve ever had with them. I can’t express how grateful I am to you; I now have 2 happy dogs and a happy husband because the dogs don’t pull his arms out of the sockets. And so far no messing in the house!
Thank you so very much.