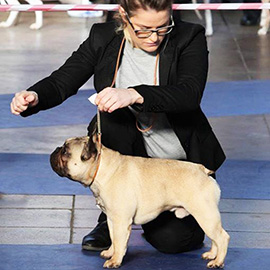 also have a look at: Reggie

Kim contacted me regarding the worrying behaviour her puppy….Frankie was displaying on walks, and most importantly at their Ring Craft classes!!

Frankie is a 10 month old French Bulldog. First and foremost he is a very much loved family dog. But as he came from a good line , Kim fancied trying her hand at some showing.Very quickly Kim noticed that Frankie s character seemed to be changing. When out walking him on the lead he was trying to bite other dogs and lunging at people also.
Kim was also trying to attend her weekly Ring Craft class , but his behaviour was becoming so embarrassing and anti social that she decided to seek professional help before thinking of attending again. The whole thing was becoming more and more upsetting and a bit of a nightmare!

When Kim and I first meet up Frankie was ‘ right on form’ and started barking and lunging to get at the approaching dog . We practiced a training technique that I teach in my weekly training classes to lower Frankies dominance and get a little more over all control, which proved very successful. Kim then decided she would actually like to attend my weekly classes, because after all, there’s no better place to practice being around other dogs!!

Frankie has just finished a 6 week course at my training classes here in Longdown and he’s actually been a complete ‘ star’. He has been calm and happy and shared the floor space with many other dogs , never showing any of his previous behaviour.

But, the big day was always going to his first show and I asked Kim to update me when this day was done…..not that I had any reservations that Frankie was going to let Kim down.

Hi Tricia. Just wanted to let you know that Frankie was brilliant at the show…we managed to get 5th place, which I was so pleased about, considering he is only a pup.
I have high hopes for him in the future!!
I just wanted to say thank you for all your help with him, I thought at one point I would never be able to show him. He’s such a fantastic dog now and I’m well pleased with how much he has improved . Kim x!