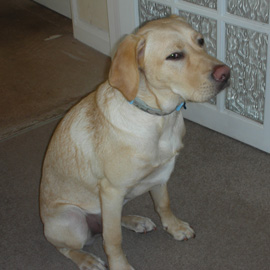 also have a look at: Harvey

Henry’s owners contacted me when they were really at their “wits end” to know what to do with their yellow lab. And as Angela said herself “He rules the roost and we just can’t cope with him”, they didn’t want to get rid of Henry but he was just proving to be a little too much.
Angela and her family had owned yellow labs before, so it wasn’t as if it was a new breed to them but on first meeting Henry I was amazed at how big and strong he was for only 6 months.

Not only did Henry grab brushes and vacuum cleaners but if you tried to lay down any rules to him he ran at you with his mouth open and grabbed your arms or hands and it did hurt.
And to top it all if you tried to discluded him he continually barked until you gave up and let him be back with you.

When visiting Angela’s home Henry was on his best behaviour… Must have heard I was coming round, so I could only imagine what Henry’s “melt downs” were like. So I put some new rules in place and awaited Angela’s phone call and to be honest when the phone call came it was a bit disappointing. Henry just wasn’t shaping up. So plan B was put into action and Henry came to stay with my family for a couple of days so I could have first-hand experience of Henry’s behaviour and it didn’t take very long for Henry to give me a performance of what he can be like to live with.

Henry went back to Angela after two days with his new routine, do’s and don’ts, rules and boundaries and this is what Angela had to say about Henry a couple of months later

We recommend you to everybody. He is a different dog to live with. Thank you so much..