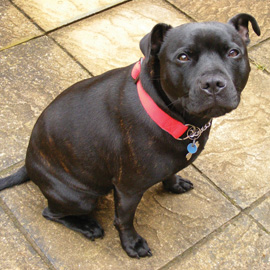 also have a look at: Jasmine

Kaiser is an 18 month old Staffordshire Bull Terrier and his owner Shirley contacted me because she just felt he was generally getting out of control!!

Kaiser had become very strong on the lead and Shirley was now finding it very hard to get him out on walks, coupled with the fact that he had a bad meet and great with other dogs, he wasn’t aggressive , he just ran at the other dog hard, often resulting in them being knocked over. And understandable other dog owners did not like this behaviour and neither did Shirley.

I met up with Shirley and her husband and first of all we found a suitable collar for Kaiser and then we did some basic obedience training….Heal work being first priority. Kaiser was a very quick learner and took on the new instructions virtually within half an hour!!
We then tackled the other issue of Kaiser’s over the top behaviour to other dogs and people, came up with a reliable plan that Shirley and her husband practiced with me.

Shirley emailed me a week later with an update and this is what she had to say….

I just wanted to give you an update on Kaiser. I have been out everyday with him and he has changed so much, he no longer pulls or even tries, its like having a different dog. I have been shocked by other peoples attitude towards him as well. Now they can see him walking to heel and calm they have approached me and let their dog say hi and even a neighbour who was scared of him jumping at her has petted him.
He is really listening to the new commands and has stopped his barking when anyone walks down the alley behind our house with that command.
I never knew how good it would feel to have him under control, we are all using the same commands and I am so happy that I came to see you, I cant thank you enough you have given us both a new lease of life.